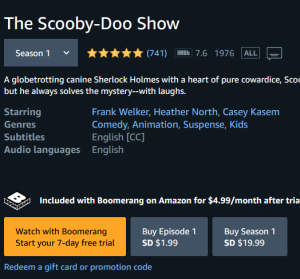 Welcome to the world of overpriced television media. Old television series 40 and 50 years old are being priced to excess.

Hollywood has an overinflated sense of itself. It used to be that re-runs were pretty much freely available and that the media encouraged viewers to share posts and videos of their shows, even older ones, to get views. But Hollywood is now operating under a delusional philosophy that we will PAY to watch old television series that are two, three and event twenty years old or more.

Enter the Plandemic and lockdowns. People stayed home and began working online and spending more time watching television. And yet there was more than one lockdown occurring. Beginning around the time of the so-call “covid” events, Amazon and many other businesses doing streaming video began to corral their media and took it into their own streaming businesses and saw this as yet another means of forcing the public into paying for content that was already broadcast and which they wanted to view again.

One can see the impact with old series like Star Trek TOS, paranormal shows like Ghost Adventures, The X-Files and even the 50+ year old series “The Twilight Zone” all packaged up and costing $10 for each season’s worth of videos.

Just on a lark, I went to see what Scooby Doo costs for Season 1. It’s an astounding $20 for the first season!

Folks… We’re being shit on. It’s that simple.

If it was only a small portion of television series affected or old movies, I would let it pass, but this has now gone so far that we have lost pretty much the ENTIRE re-run genre and found ourselves facing a virtual hostage situation of past series we loved being held behind paywalls.

Worse yet, try to find clips of favorite episodes on YouTube. 90% of the time you can’t. Hollywood and the big budget streaming companies have declared war on you and I with this Mediapocalypse. Couple this with redefining words to confuse and obfuscate our history and you get that this is all part of a larger agenda.

“The Content War.” That is what I call this now. And what sits in the balance are great content of the past being held hostage while we are bilked of $$$ to view it all.

I’m done. I used to love Amazon and YouTube but when they engage in this kind of out of control profiteering and lockdown of the entire history of television and movie content, it might just be time to move on to produce our own content and start keeping the television turned off.