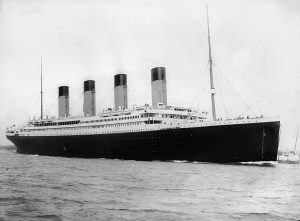 Youtube are SUCH first amendment violators. They wouldn’t let me even mention one possible reason for Titanic’s disaster. Let’s talk about for what it really is: A Titanic Crime Scene.

While were at it, I challenge YouTube to speak up and just say in plain English: “We Censor Free Speech” in their little message dialogues. Instead they lie and say “We weren’t able to add your reply. Please try again”.

Of course they don’t listen or let you post again. The bot has a timeout for you to not be allowed to post until you “correct” your behavior. It’s just part of the “reeducation” process for people to speak only what we’re conditioned to think.

The best method is to post it elsewhere and show the proof of the censorship to get people thinking.

On to the truths to consider as a back story to Titanic.

Titanic was no accident… Might be a good idea for people to know that Astor, Guggenheim and Straus, the three most powerful men who stood against the Rothchilds and that criminal J.P. Morgan against the aims of the the private Western Central Bank, were given free passage aboard Titanic.

Important lesson folks: There is NO free lunch. Ever.

This is what happens when YouTube’s Censors won’t let you post the truth as you see it. Youtube’s Censorship Department are made up of cowards afraid of real speech. I was over the target and they don’t like it when Truth is spoken.

Forward to today with a utterly bankrupt central bank. The entire world political and fiscal mess we are in now traces to Titanic and what happened on that spring morning. Don’t believe me? Do the research for yourself.

Does it make sense to get rid of three powerful men objecting to your power and banking ambitions and to do so in a way that is a powerful message to others who would fight you and to mask it as a disaster?

When it comes to history, such a move is no new thing. One only has to look at the terrible events of 9/11, Kennedy, Bay of Pigs, the so-called disease of 2020, or any one of a litany of historical events going back centuries and we see the same hidden hand behind events. That hidden hand traces it’s way through all of recorded history and likely before there was a written language. Nothing is EVER what it seems on the surface. X-Files says it best: “Trust No One”.

Titanic’s wreck is no “accident” scene. It’s a crime scene. Do the research and decide for yourself… Remember, you can’t trust a single bit of news now.

You can tell you are hitting the mark when they won’t let you post a theory that the author of the video below invites you to share. The proof of that censorship lies in the first image of this article. Seems that the truth hurts too much for the Rothchilds to let be spoken.

Think for yourself and look at the hidden truths behind all “news” and “history”. The MSM history of Titanic isn’t the real one. The only real truths are the wrecked lives and the dead ship at the bottom of the ocean.

My estimate is that only five to ten percent of all “news” is even close to the real truth. The rest? Manipulated, stretched, twisted or outright lied about to the public. Don’t buy into any of it. Take “news” in small doses and turn off the TV and then THINK for yourself. Once you engage in critical thinking, the blinders come off.

There you go YouTube. You wouldn’t let me comment on it, so now I’ve made this an issue. Keep muzzling comments… I will go around you.

The real “lie” is the truth they won’t let be told.

Want the real story? View the video below: