I love it when YouTube’s shadow-banning black-ops goons take my comments down off videos containing controversial topics. It’s so… personal.

Then again, it’s one of those things when you find yourself dealing with aliens (of the Earthly variety) making war on American Freedoms and using their high technology to stifle free thought and exchange of information.

Back in May of 2020 a UFO researcher discovered a black triangle from way back in the bad old days of Apollo 9 in Earth orbit while they were testing the Lunar Module and qualifying the LEM for flight operations to the moon. In image “AS09-22-3325” dated March 8, 1969 at 20:01 GMT, the astronauts photographed a seemingly normal scene of the Earth from orbit. Imagine people’s surprise when a couple of anomalies pop up in a hi-res scan of the image noticed over fifty years later. 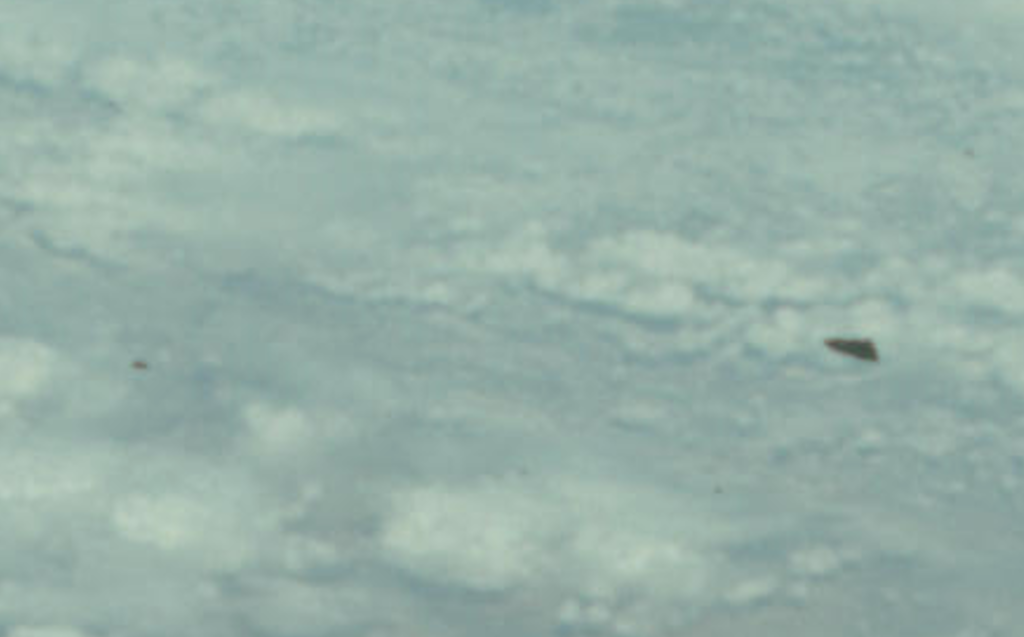 Black triangle at right and a circular UFO to the left in this image. NASA image AS09-22-3325.

On Tyler’s channel at SecureTeam10 on YouTube, I watched in amazement as one of the early incarnations of the now common black-triangle UFOs made it’s appearance from all the way back in 1969.  I noted a disc-shaped anomaly that was to the left of the triangular image (that Tyler did NOT mention in his video and which other’s took note of in the comments) and was immediately aware my comments were being, once again, shadow banned. Really YouTube? You had to pick a fight AGAIN?

Tyler’s video where I posted my comments is shown below and where you can learn more about this interesting find.

So I’ll post my comment here so YouTube’s idiot comment enforcers CAN’T take it down: “The image number is “AS09-22-3325″ (you can search and get the hi-res version yourself to see it) and there is a SECOND UFO to the left of the triangle, circular in nature. It is seen at 7:13 into Tyler’s video. I worked for 32 years in the aerospace propulsion business and saw plenty of interesting tech but nothing like this from Apollo up to current spacecraft in use. Apollo was part of my everyday life as a kid with my father working on the escape propulsion motors and also he did key work on the Service Module main engine (the AJ-10-137) combustion chamber and nozzle design and materials used. Whatever these are, they are certainly out of place and NOT space junk from what I can tell.”

There. I posted my FREE SPEECH just as I am guaranteed the right to do by the U.S. Constitution.

I DID manage to keep one comment up on Tyler’s video after posting variations about 10 to 15 times or so times so it is clear that YouTube is scanning with some bot program to remove comments with keywords it doesn’t like combined with a wee-bit of human oversight. To this end, I can say I beat them AGAIN because free-speech and rights TRUMP (get it?) socialism once again.

I am reminded of the scene of the aliens in Independence Day where armies of aliens were engaged in combat against the puny Humans only to have a spectacularly bad day themselves once the upload completed and our heroes departed YouTube headquarters… err…  the Alien Collective.

It is clear that someone is trying to limit any information concerning UFOs on YouTube and given the censorship taking place, one can take a few guesses at who might not like it. My response is “tough crunchies’ to said Internet goons. Our friends at UFO Seekers have had a lot to say about these developments as the powers-that-be try to put the fake news in place of authoritative content on YouTube and other social(ist) platforms. Except in a very few instances, YouTube has absolutely slammed a lid on alternative content and changed the search results to only feature stories on UFOs by people whose only job is to read scripts filled with lies to you, the viewer. The only answer is to ignore the fake news and go where the good content is. Information truly WANTS to be free.

The original discoverer of this pair of anomalies is Scott C. Waring. His article detailed his initial discovery on May 23, 2020. I guess all that time people now have because of the plandemic ruining the economy sort of back-fired on the people trying to hide the truth about what is going on with UFOs and unusual tech in our skies eh? See the site below (click in the image to view the original article). Visit his interesting content by clicking the image below. 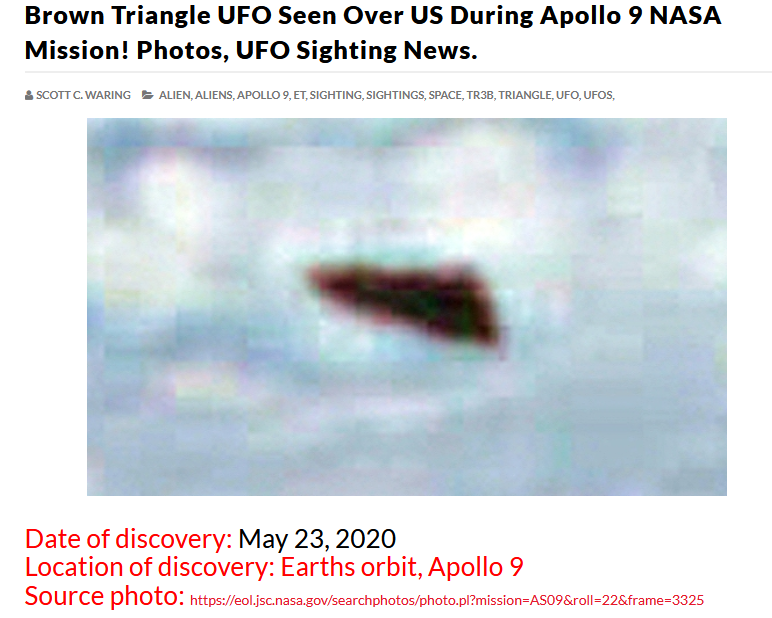 Again… A BIG THANK-YOU to the YouTube bot and likely some foreign jerk whose only job is to mug people from a keyboard shadow-banning free American’s comments. All you suceeded in doing was to inspire me write this article. Keep up the good work with your Fourth-Reich censorship there at the Socialist Monolith there guys.

A little more information and a lot less censorship

Before we go, here is the exposure information and location where the triangle and it’s little disc-friend were seen by Apollo 9.

The camera was pointing at the Chuska mountains in Arizona (35.5° N, 109.5° W) at the time of the exposure. The camera metadata is as follows: 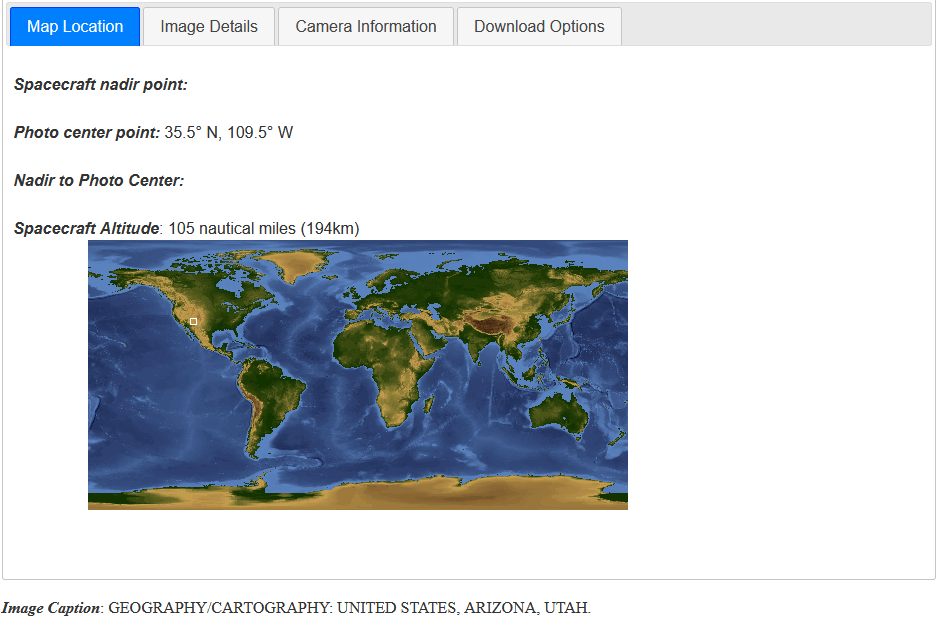 Where the Apollo 9 camera was pointing during the image capture of the black triangle and circular UFO. Source: NASA