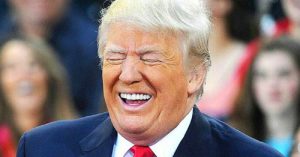 Forty-Five was correct in his assessment of all things “woke” turning to absolute shit. It seems that 2022 will find the modern form of Soviet-Style “Cancel Culture” alive and well in the utterly useless Main Stream Media.

I refuse to go along with their idiocy as per usual as a member of the Main Stream Population (MSP) who represents the Adults in the Room (Hashtag #ADULTSINTHEROOM should be the new trending tag on Twitter!).

Harry Potter author J.K. Rowling entered into a firestorm in mid 2020 over her posts on Twitter over gender politics and was roundly criticized for her views concerning transgender community terminology and labels. Ultimately she herself was labeled as a  ‘trans-exclusionary radical feminist’ (TERF) by many on the Left for daring to challenge their inane “truths” to their faces on Twitter. 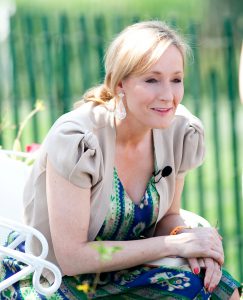 Seems to me the real meaning of a “TERF” is a person who dares to speak Truth over the ravings of a minority viewpoint and who suffers the raging storm for that act of courage. Perhaps the right term is “Truth Ever Right Fights“.

Of course, others are free to disagree with my thoughts and that is the beauty of our free speech at work in the great stew pot of ideas of which We The People decide are correct or not as per our individual will and not to the ravings of a collective group of mad sheep.

This brouhaha that Rowling finds herself embroiled in has all the hallmarks of a  sane person engaged in a fight with what author Dione Fortune once called “mad sheep” in her classic 1957 book “Moon Magic” (completed after her death in 1946). That book was written decades before J.K. Rowling found herself facing the progeny of the “Mad Sheep” for the sin of speaking truth about biology.

Fortune was speaking of the ills of going against the Christian majority in England during her time in the late 19th and early 20th centuries. Rowling now finds herself in mortal combat with that same mentality against the forces of the self-described main stream media who now defy science in favor of political correctness in the 21st Century. Of course their views are anything but mainstream but when has that ever been any different?

There is no room for revisiting failed ideologies of the past. Ronald Reagan aptly delivered the following point during a speech on communism during his presidency that I find to be a timeless truism:  “What I am describing now is a plan and a hope for the long term—the march of freedom and democracy which will leave Marxism-Leninism on the ash-heap of history, as it has left other tyrannies which stifle the freedom and muzzle the self-expression of the people.” 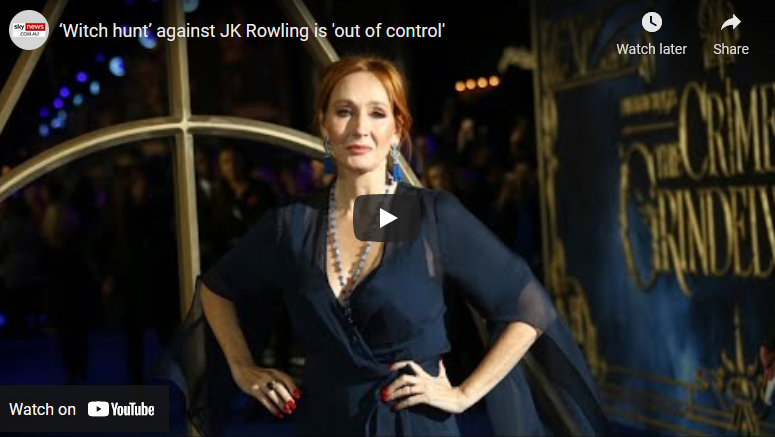 Rowling finds herself in good company with many of the people she does not find common ground with in public and for whom I sometimes wonder if she is more in tune with than she might be comfortable to admit. 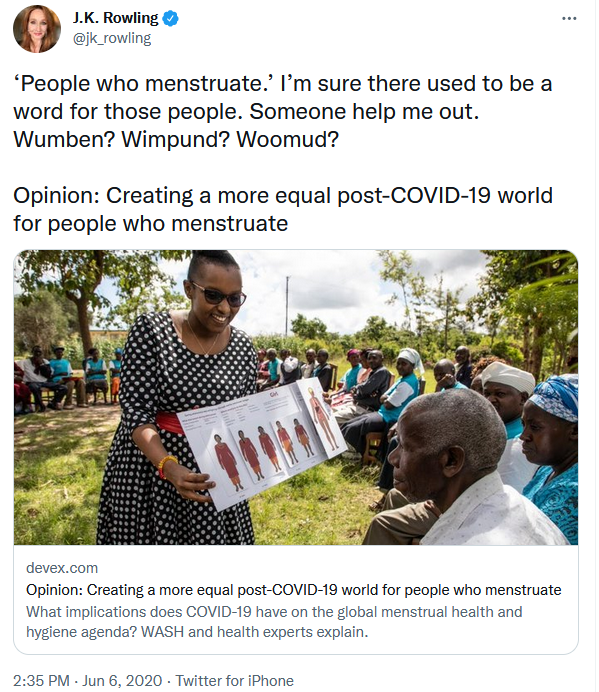 Rowling is definitely a controversial figure and while I do not agree with many of her political views, I regard her as master story teller and leave it at that. One does not need to agree with everyone’s views in order to enjoy their works and company.

Dione Fortune wrote in another of her books, The Secrets of Dr. Taverner, the following:

“… it is an excellent thing to have a diversity of friends because they develop aspects of one’s nature that lie dormant, thereby rendering it incomplete.”

If I were to have J.K. Rowling as a friend, I would consider that a good thing, differences and all. She is of a different life path but is someone worth knowing and reading.

I’m not even sure how to classify her but she strikes me as very intelligent and operating in a complex environment that I wouldn’t wish on anyone. Success has it’s price and scrutiny is the natural bane of anyone who carries the cross of fame on their backs. I do not envy those in the limelight.

Rowling, with her stance on the subject of the science of gender biology and the scientific truth that there are two sexes capable of reproduction and no others  has dared to defy the “woke crowd” with her combative stance on Twitter. She has my respect for being courageous enough to speak Truth plainly and suffer the consequences from the arrows of the Left.

My prediction for 2022 with Rowling is that Twitter will suspend her account and she’ll find herself in good company with the rest of the Adults In The Room who have had enough of the Left’s insanity. 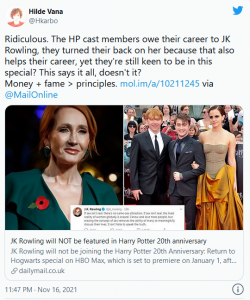 For Rowling’s crime of speaking Truth she was banned from the Twentieth Harry Potter celebration by HBO. Rowling found herself in the center of a media storm with the multi-lettered self-identifying “community” collection of sheep screaming obscenities at her for asking in a wry post what the correct term for “women” was these days.

Her simple question of asking the Left if the correct terms are “Wumben? Wimpund? Woomud?” in response to the left’s new definition of women as”people who menstruate” in a June 2021 post on Twitter had many wokists in a frenzy for her daring to question the pronouncements of the tiny but vocal minority who now control social media.

A number of the stars of the Harry Potter movies distanced themselves from Rowling as a result of the controversy. Ironic considering how their very careers were made by this woman in the first place.

I guess I’ll have to add HBO to the list of media sources I now won’t be watching. My how that list is now encompassing the vast majority of media outlets today. I will be cancelling my satellite subscription soon if the trend continues unabated.

I suspect when Hollywood and the MSM go bankrupt because no one is watching them after these behaviors alienate pretty much most of the population, it will force them to change tack and reverse this course they find themselves on. They are already starting to realize the population is pissed off but haven’t quite given up the notion they can control our thoughts simply because they think they can. 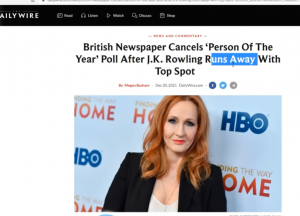 The  part I find most humorous is that Rowling was voted “Person of the Year” for 2021 in an online poll at the Guardian (a online U.K. news publication). Once it became clear she was the runaway favorite, the Guardian pulled the online poll with the statement “This form has been deactivated and is closed to any further submissions.” in it’s place.

The Guardian made the further mistake of asking it’s readers on Twitter to respond to the following question: “What’s the funniest thing you saw on the Internet in 2021?“. The responses were numerous with quotes such as “you stopping the Person of the Year voting because J K Rowling won it.“, “The Guardian closing its Person of the year award because JK Rowling got so many votes- that was totalitarian levels of funny.” and many other similar comments.

The lying “Fact Checkers” of course had a field day denying that Rowling won the poll, but the truth was out and the Guardian will likely never-again offer a poll that openly lets the Public vote on their favorites again unless it is from a pre-selected list of their own favorites. How very Totalitarian of them.

Evidently, even the Media engages in voter fraud against it’s own, much like that of certain elections of recent times.

Mental Note to tell the #MSM: “Nobody is watching you guys or reading your bilge”. Remind me to send that to them. 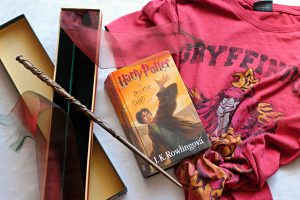 The hashtag #IStandWithJKRowling was created by Rowling’s fans who sided with her expressed after she was cancelled out of the HBO twentieth anniversary Harry Potter show.

Christian Walker tweeted: “JK Rowling worked tirelessly creating the world of Harry Potter, and they’re refusing to include her in the 20 year reunion because she thinks women are women and men are men.”

The Left feels a compulsion to continually support scientifically impossible and unpopular causes that they feel the public at large needs to embrace and for which the Public has responded to with frank and unsympathetic criticism. This, of course, results in censorship of not only the public but of themselves when their polls go against what they want to push.

Quoting “The Daily Wire“: “As The Daily Wire previously reported, trans activists have retaliated against her refusal to capitulate to their agenda by threatening to send her pipe bombs and publishing her home address on social media. Showing the flair for dark humor that runs through her novels, the world’s richest author wryly joked that she’s received “so many death threats [she] could paper the house.””

I am reminded of how similar events transpired in 1930s Germany and Russia based on the threats of violence for disagreeing with their agendas of controlling “truth” in the the eyes of the Public.

The National Review posted a story in early January 2022 that suggested “During an episode of the podcast The Problem, satirist and former talk-show host Jon Stewart drew comparisons between the goblin bankers in the Harry Potter series and age-old anti-Semitic literary caricatures.”

Jon Stewart sought to distance himself from that statement later with the comment “I did not accuse [Rowling] of being anti-Semitic, I do not think the Harry Potter movies are anti-Semitic. I really love the Harry Potter movies, probably a little too much for a gentleman of my considerable age.” He added: “There is no reasonable person who could have watched [the podcast] and not seen it as a light-hearted conversation among colleagues and chums.”

How desperate does the Left have to get to have to invent new criticisms to drag down someone who won’t back down from their threats? I guess we’ll be seeing “racism” criticism next for how  the Muggles represent the oppressed peoples in comparison with the pure bloods. Yes… people can be that ridiculous.

From what I can see of J.K. Rowling, her writings are simply great stories that reflect a complex society that hearkens back to the 19th century in many of it’s aspects and has faithfully struck true to the biases and norms of those times. The vast majority of us are adult enough to know this basic fact. The ones that cannot handle these realities and portrayals are the same people vilifying George Washington and Abraham Lincoln.

She’s got a right to her opinions. And she’s got a platform that lets her share those opinions, just like the rest of us.

She’s made a lot of enemies in the past year and it only makes me more determined to read her books and watch the movies she’s inspired. She and I may disagree on our politics in many places, but I celebrate her right to speak her mind and truth. I can only wish her the best and many more successful endeavors in Life. 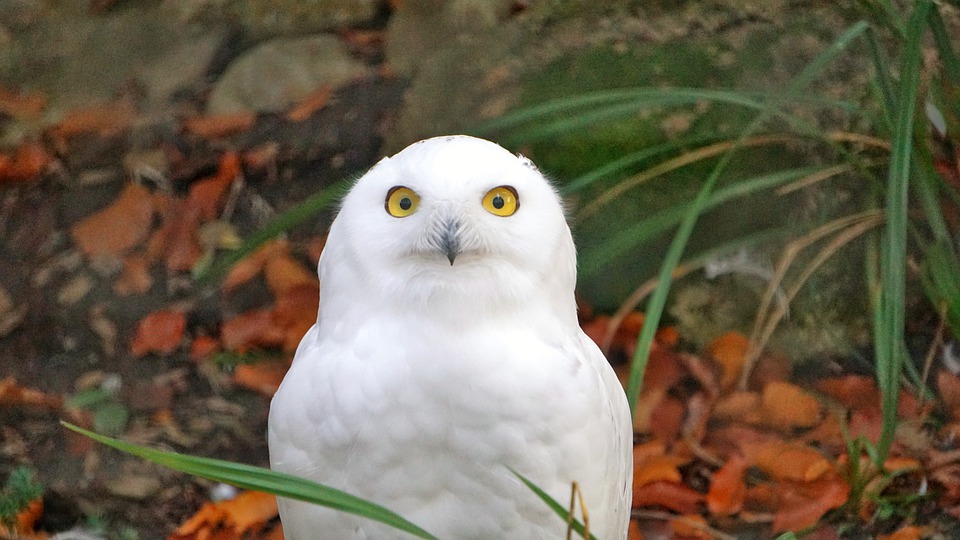