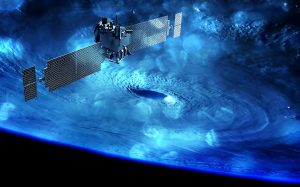 The advent of modern satellite imagery with high resolution photos has revolutionized the world with the ability to spot signs of ancient civilizations, pinpointing addresses in more mundane applications, historical photos of a location on Earth over time and much more.

An unexpected benefit of this technology is that evidence of cryptids is often by people from the comfort of their arm chairs. The point of this article is to share evidence of a large Sasquatch seen in Landsat images shared on services such a Google Earth.

I have noted over the years of a number of these sightings on Landsat images that can easily be viewed on Google Maps and will share what I have found to date below. Many more of these are likely out there and this will be something shared on this site over time as more evidence and data come in. 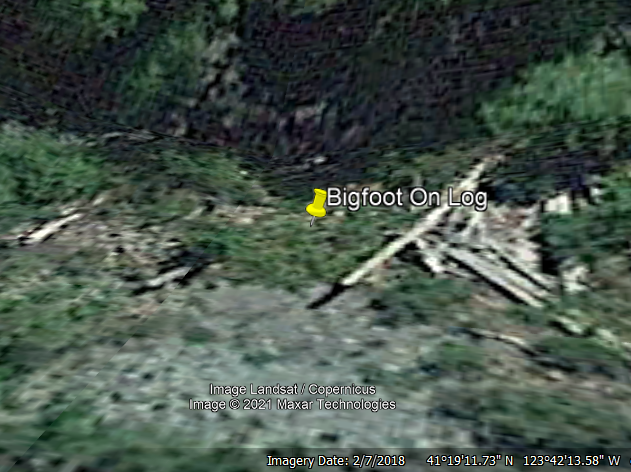 I have named this create the “LogSquatch” as a nickname. In the image to the left, the creature is standing over a log and facing to the lower right corner of the photo.

It is all dark colored and has an obvious bipedal shape that cannot be mistaken.

This image was shared some years ago on YouTube and on various sites but disappeared from view and it took me some time to recover the coordinates by searching for it from memory.

The creature appears to be straddling a log. It is facing to the west in the photo and has it’s left arm clearly visible along with both legs. The face is also quite recognizable in the photograph.

He appears to be standing in an erect posture and may have his left arm slightly bent and at an angle in this image. The right arm may be straight at his side and casting a shadow.

The satellite photo, taken on February 7, 2018 at Bluff Creek, California is remarkable in that the creature likely had no idea it had been captured on a satellite image. What it was doing standing or sitting straddled across the log in the photo is unknown, but it is clear that it towers about the log and is much wider than the log at around 4 to 6 feet across!

Although the creature appears to be standing, the measurement of it being 12 feet tall may be off by as much as 1 to 2 feet if the creature was sitting or crouched. The other factor to recognize is that the measurements may not be accurate due to not being able to distinguish the shadow of the creature and from the fact this was taken from space and the dimensions are bound to not be terribly accurate. Still, it is clear the scale of the creature is huge and Google Maps estimates of size cannot be all that far off.  I would hazard a rough size of this creature at somewhere around 11 to 13 feet tall with a 4 to 4.5 foot wide shoulder span. He’s a big boy this one.

The other critical aspect of this sighting is that it occurs eight miles south of the famous 1967 Patterson “Patty” sighting location.

This location of the 2018 sighting in relation to the Patterson Gimlin film location (GPS location 41°26’4.20″N 123°42’42.12″W) is significant in that it clearly shows that there are ongoing sightings of these creatures

The most striking aspect is that Bluff Creek is the location of both sightings. A third sighting identified as a “Potential Sasquatch Sighting” is documented as well and is not far from the Patterson Gimlin site. Clearly, this is a hot spot.

Some estimates of the size of “Patty” range from about 6 foot 6 inches tall to about 7 feet 4 inches. A good middle ground for her would be to split the difference and place her at around 6 feet 11 inches in height. She appears to be sexually mature but might even be a relatively young female and still growing. The image seen on the LogSquatch from 2018 places him at 12 to 13 feet in size. Note I am calling him out as a male and it makes sense given the sheer size and width of this creature in the satellite image.

At coordinates 46° 3’24.54″N 121°31’17.75″W highlighted by the following YouTube video, this image of an approximately 9 to 10 foot tall Sasquatch can be found. The author has posted two videos on his channel, both of which relate to this find he made and there has been no more activity on the channel. He gave out the coordinates in the second video 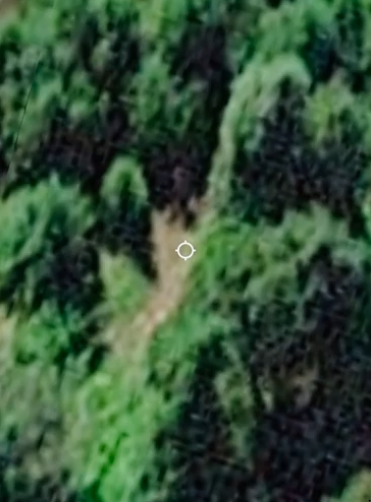 A frame grab from the video shows a bipedal figure, apparently walking from right to left and standing nearly as tall as the tree to which it is facing.

The creature may be part of a larger group that the channel owner detailed in his second video which I found to be very compelling evidence of a group staying together and likely foraging or relaxing.

It would make sense that these creatures would be in a group as it increases the chances of survival and that each has specific roles within the group, from guarding the perimeter to babysitting and to food gathering.

The satellite image was taken on June 9th, 2015 and looks to be a photo taken slightly before or after noon, given the was the shadows are casting.

There is no indication that this group had any idea it had been captured and this makes the discovery of these creatures on satellite photos one of the best ways to get evidence of the existence of these forest people.

The channel owner did mention he did a bit of photo-enhancement on the images but I remember having seen the image from 2020 myself when this video first came out and I saw the original for myself on Google Earth. 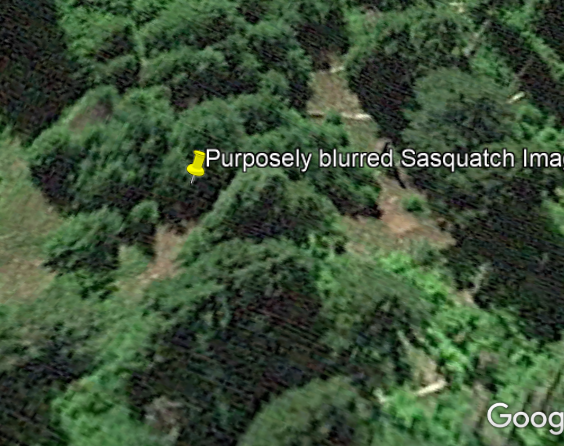 Much to my surprise today when I went to reexamine the original coordinates on Google Earth was to see that the photo had been blurred substantially. This may have been done purposely as Google has been known to do this, likely by request and for reasons that defy explanation at this time. Of course, we do know why, but we’ll just leave it at this ;>)

Still, enough of the strange figure remains visible to see two legs and that there is something unusual.

The image is oriented with west towards the top and to the right slightly.  There are other shapes in the image towards the top which are indicative of other creatures that are more in cover and out of direct sight.

The site is located around 10 miles south of Mount Adams in Washington and is smack in the middle of where many sightings of Sasquatch have taken place in the past. One sighting that dates to August 2015 was in the vicinity of this Google Earth image and details the experience of two boys who were near Mount Adams at a lake near the volcano. Both boys wanted to immediately leave the vicinity as a result of their encounter.

I am attempting to locate more satellite cryptid photographs of all sorts to share here on the site and will be publishing as I find the material, along with GPS coordinates and supporting images and documentation. Additionally, images of strange and unusual things are continually cropping up on Google Street images, so look for for those in an upcoming article. Until then, keep your eyes firmly on a swivel and looking at the strange and unusual world we live in. If you have a sighting or unusual item to share, visit the contact link and I will get back with you.